Not digging the moles?

Using do-it-yourself products often do not work well when homeowners are dealing with moles. 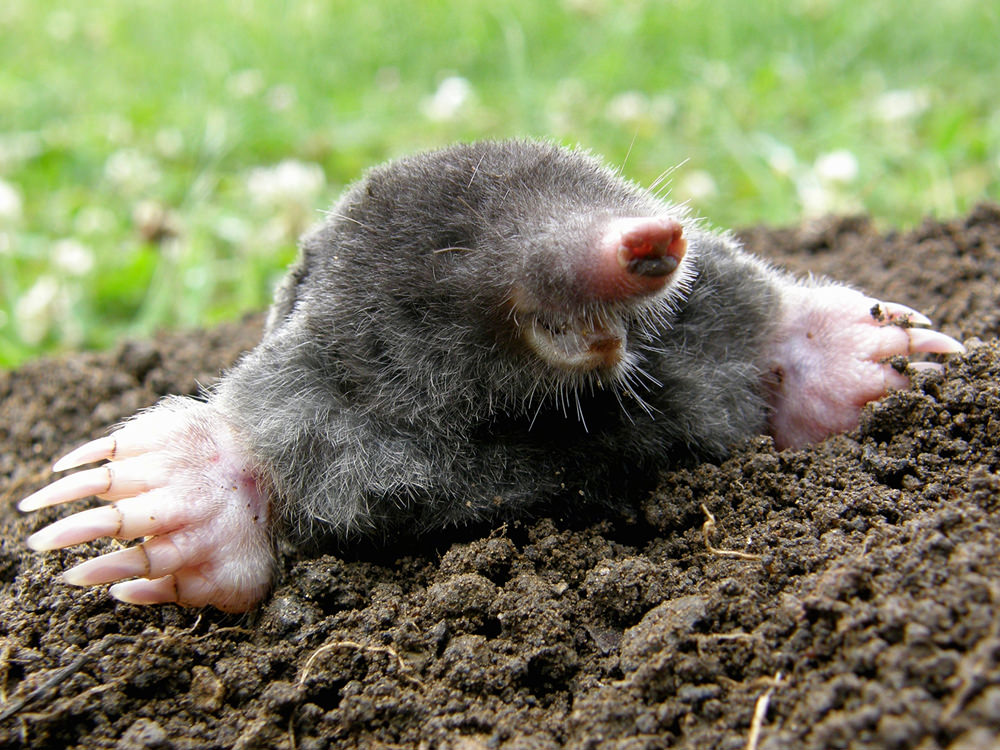 About Moles in Michigan

Moles, along with their relatives the shrews, are members of the mammal order Insectivora, which literally (and appropriately) means “insect eater.” Moles are specially adapted for a life underground—they have short thick fur (that can lie comfortably in any direction), tiny eyes, and ear openings that are hidden under the fur. Their bodies are rather narrow and compact, their snouts are pointed, and they have large claws on the toes of their powerful, shovel-like front feet. Under the right soil conditions, moles can tunnel at a speed of 15 feet per hour, and in favorable areas, shallow tunnels can be built at a rate of 12 inches per minute – No wonder it seems like they can ruin a lawn almost overnight!

There are two species of moles in southern Michigan: Eastern moles are by far the most common species in suburban yards, while star-nosed moles are found mostly in damp soils near ponds, marshes, or other wetlands, and sometimes even swim and feed underwater. The eastern has a short, almost naked tail, while the star-nosed has a longer, furry tail and (as the name implies) distinctive tentacle-like projections around its snout.

In warmer, damper weather, eastern moles make their well-known feeding tunnels just under the surface; they push up the soil to form the long, winding ridge that most annoys homeowners. In drier weather, and in winter, they create deeper tunnels, at times over 2 feet down; the excess soil may be pushed upward, forming the well-known “molehills.” Both mole species can create surface-breaking tunnels and “spoil” hills and (contrary to popular belief) you cannot always discriminate between the species on the basis of the shape or size of these hills, though in general eastern moles tend to create larger, more irregular hills, while star-nosed moles create lower, more neatly rounded hills, at least in wetter soils.

Typically in May a female mole gives birth to 3 to 5 naked babies in a cozy nest usually in one of the deeper burrows. They grow quickly and leave the nest in about a month, and are independent and making their own burrows by late summer or fall. Eastern moles tend to be rather solitary animals, and possibly territorial. Though it may seem like your yard must be inhabited by hundreds of moles, it is more likely that the maze of tunnels criss-crossing your lawn was made by only a few moles, and quite possibly only one.

Moles have huge appetites, and may eat up to a third of their weight in food each day. The diet includes mostly earthworms and adult and larval insects, along with a few centipedes, spiders, slugs, snails and a bit of vegetable matter such as roots and seeds. Moles occasionally attack the underground nests of yellowjackets and other wasps.

All in all, moles are beneficial animals, consuming numbers of potential insect pests and aerating the soil. However, there is no doubt that they are highly attracted to the bounty to be found in well-watered and fertilized lawns, and here they become quite a nuisance.Source: Michigan State University